Kythnos is a small, bucolic island in the midst of the Western Cyclades, off the coast of Greece. The island’s wild, rugged, fertile topography is home to over 70 beaches, many of which are still inaccessible by road, and its history dates back to at least the Bronze Age. Today, the island is dotted with traditional Greek homes, with white walls, blooming bougainvillea and a year-round population of less than 2,000 residents, many of whose families have lived on the island for generations. In other words, Kythnos is about as far from the party-centric and touristic islands of Mykonos and Santorini as you can get.

In the summer of 2019, I was lucky enough to discover Kythnos as a participant at a yoga and Pilates retreat run by Fykiada. Fykiada is run by two Greek women who grew up spending summers in the Aegean, and wanted to replicate the experiences for others, with a wellness bent. Fykiada hosts retreats on a number of Greek islands — including Koufonisia, Kythnos and even Mykonos — each of which incorporates mindful movement, hyperlocal and healthy Greek cuisine, and plenty of time to swim in the sea.

My retreat of about 10 women (and one lucky man) arrived in Kythnos by sea after setting sail for about three hours from a port south of Athens. The natural beauty of the island was immediately apparent, but our group’s jaws really dropped when we arrived at our villa. Perched at the edge of a cliff overlooking the ocean, the sprawling home had too many bedrooms to easily count, and multiple terraces looking out over the ocean. A swimming pool on one terrace seemed to jut off straight into the ocean.

As we would come to learn over the course of the ensuing week, there is no finer place to attend twice-daily sessions of yoga and Pilates than a terrace looking over the ocean. Every morning, we would rise for a light breakfast of food made almost entirely in a closed loop on the island, including fresh-squeezed orange juice, homemade bread and dates. After breakfast, we took to one of the patios and were led in a workout, ours taught by celebrated Pilates instructor and wellness expert Zoe-Maia. Classes clocked in at just under an hour, and by 10am most mornings we were free to enjoy the rest of our day as we saw fit until evening yoga.

And there was no shortage of ways to enjoy those days. For those who felt like lounging, reading or taking a dip, the chairs surrounding our pool couldn’t have offered a finer location. Those interested in walking around town and taking in a bit of history and architecture could go into the village of Chora, the island’s capital, where a number of local restaurants serve fresh Greek food, and an ancient Byzantine cathedral stands watch over town. The island’s beaches offered ample opportunities for adventures and swims, and for those wiped out from the morning’s activities, simply napping at the villa was also a compelling choice.

Late each afternoon, we gathered for a yoga session, which would prove the perfect transition from day to night. As a lifelong morning exerciser, the 5pm sessions on Kythnos changed me for life, as finishing the workout (again on the terrace) and heading to shower before dinner provided a wonderful way to switch modes from the activity of daytime to the respite of evening. After yoga, we all got ready for dinner, which was served by a mind-blowingly good chef, Sabrina Chorafa, whose prowess in the kitchen is combined with her passion for integrative wellness and nutrition. Translation? We could all have our gluten-free cake and eat it too, particularly since it was baked using honey from a local family of beekeepers who had lived in Kythnos for centuries.

Suffice it to say, falling asleep at a Fykiada retreat offers one of the deepest rests of your life. I woke up each morning ready for the new day in part because I knew it would hold so much wonder and in part because I had been so deeply repaired by the prior night’s sleep. But my time on Kythnos with Fykiada restored me on an even deeper level, as well. As a resident of New York City, I had found myself in a routine of yoga, Pilates and healthy eating in the city that had become, without my even noticing it, something like dutiful. Spending the week on Kythnos reinstated my sense of joy in moving my body and eating well, reminding me that true pleasure can be derived from taking care of your body, whether under the Greek sun or all the way back at home.

Fykiada retreats run throughout the summer months in Greece, and can be booked online. 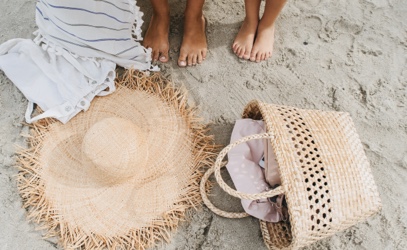 In Her Bag: Summer Travel Edition

Writer Elizabeth Nicholas tells us what she’s packing to stay well on her way this summer.