at the TWA Hotel

Ladies and gentlemen, we’ll be landing soon. Please set your watches back to 1962.
Such is the promise of the TWA Hotel at New York City’s John F. Kennedy International Airport, which is an immaculate time capsule of everything ‘60s. The first clue you’re in for something special? Sammy Davis Jr.’s “up, up and away, my beautiful, my beautiful balloon” wafting out of speakers as you approach the hotel’s space-age edifice. Clues two and three? The pristine VW bus and stately Lincoln Continental convertible parked out front. And, of course, the hotel itself, the iconic TWA Flight Center at JFK, which has been lovingly converted into a swanky ‘60s hotel.

Designed by famed architect and furniture designer Eero Saarinen in 1962, the building is one of the world’s most significant examples of mid-century modern architecture, and has been painstakingly restored. Its curved, cavernous lobby and red-carpeted jetways transport visitors back to the era of Jet Age glamour.

The 512-room hotel has two spectacular wings: the Saarinen wing and the Hughes wing. Stroll to the end of both red-carpeted runways for special surprises — period-perfect replications of Hughes’ office and Saarinen’s studio. The hotel also features a re-creation of a prototypical 1962 living room, complete with an original Barbie Dreamhouse, and decade-appropriate details including a portable phonograph, rotary phone and board games from the ‘60s. Wander through the lobby for some fun in the Twister room, and to check out the carefully curated collection of 37 vintage TWA uniforms, designed by the likes of Ralph Lauren, Valentino and Stan Herman.

On the tarmac, visitors can have a drink in the Connie Cocktail Lounge, a 1958 Lockheed Constellation airplane turned bar that seats 75 guests in first-class comfort. Try the tempting Vodka Is My Co-Pilot — Connie's take on a martini. Just outside Connie is the Roll-A-Rama at the Runway Rink, a retro roller-skating rink that’s open on weekends during the summer. And no matter the season, don’t miss the infinity pool on the roof of the Hughes wing. It’s heated to a toasty 95 degrees in the winter, is open year-round and overlooks JFK’s busiest terminal. And if you’re feeling hungry after your dip, the pool has a rooftop restaurant attached, which is converted into a ‘60s-themed ski chalet in the cooler months.

Airports are known as places of transport, but if what you’re looking for is transport to the Mad Men era, JFK’s chic TWA Hotel is the only one that will fit the bill. And if you only have a short layover at JFK, don’t fret. You can always pop over for a drink at Connie Cocktail Lounge, the super-retro Sunken Lounge and the delectable Paris Café, which are all open to guests without hotel reservations. And if you want to use the amenities or rest up in a room for a little while, you can book a Daytripper stay and spend up to 12 hours back in the swinging sixties. 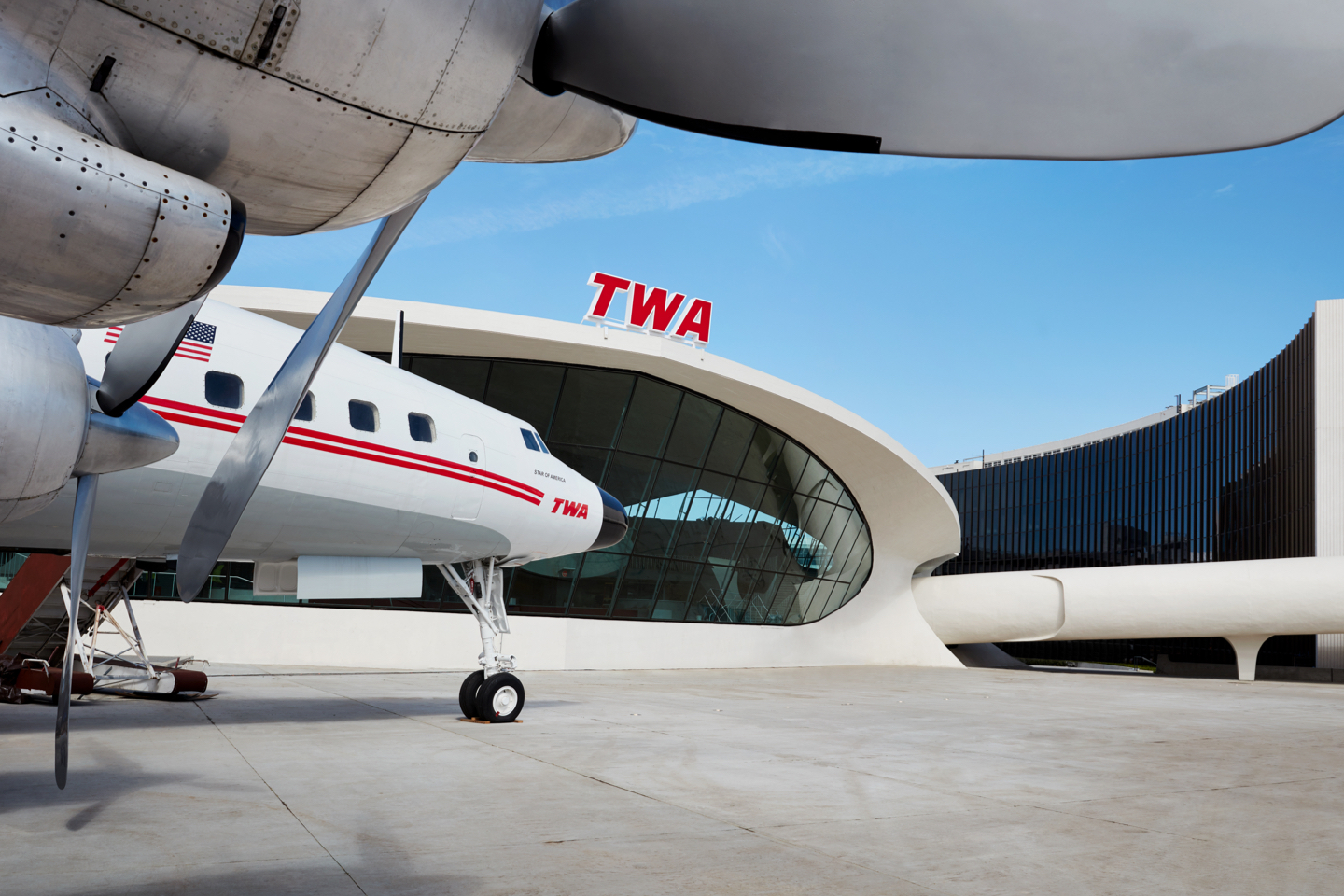 Getting There:
The AirTrain, located at JFK, is the easiest way to get to the TWA Hotel. It’s a five-minute ride from all terminals to the hotel, which is at the Terminal 5 stop. To reach the TWA Hotel, exit the AirTrain at the Terminal 5 (JetBlue) stop and follow the signs to the elevator on the same level as the train platform. Take the elevator or stairs down to Level 1. Walk left off the elevator, go through the doors, turn left and cross the street toward the Yellow Parking Garage. Turn left on the sidewalk and follow the covered walkway to the TWA Hotel front door.

TREAT TIP:
There’s clear and easy signage from Terminal 5 to the hotel, so don’t worry about getting lost and accidentally winding up in the 21st century.